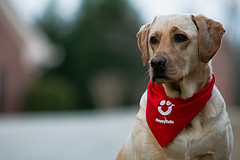 Can children who have been abused really be helped by Animal-Assisted Therapy? Case studies have proven that they can.

In what specific ways has Animal-Assisted Therapy fostered healing in abused children?

Animal-assisted therapy helped an 8 year old girl named Nancy in numerous, priceless ways. Nancy had been badly abused by her mom. In fact, the little girl had been hospitalized several times. Finally, the court system decided it had had enough and sent Nancy to a 150 acre farm/treatment center.

Nancy was required to have 2 therapeutic sessions a week. “Nancy was essentially nonverbal and never opened up to discuss any of the issues pertaining to her abuse.” This was probably quite frustrating to her therapist.

Nancy’s therapist tried using clay, dolls, and art to get Nancy talking about her abuse. Finally, the therapist decided to try a different approach. She took Nancy’s therapy session outside. Why? Because she was aware that some animals had recently been born.

Nancy’s seeing the baby animals turned her therapy around — it got her talking about the abuse she had endured, putting her on the path to healing.

When Nancy saw the newborn animals (rabbits), she “panicked” and urged her therapist to get the rabbits away from their mother. When the therapist asked why, Nancy said, “Because sometimes mothers hurt their babies.”

This admission from Nancy gave her therapist a window to begin asking about the abuse she had gone through. That’s when the real healing started. Simply seeing animals was powerful enough to get this young girl’s therapy on track.

Animal-Assisted Therapy also extends its benefits to children with other emotional problems.

For instance, an 8 year old boy named Sam was brought to a therapist by his parents. Sam went from being very outgoing to being extremely introverted after changing schools. He would not speak to his school counselor — in fact, he rarely spoke at all. Sam’s parents were desperate.

The therapist Sam’s parents brought him to frequently used Animal-Assisted Therapy in her sessions. With Sam, this was the strategy she employed. She began exploring the farm/treatment center with Sam and introducing him to the animals. Sam finally spoke when he saw the guinea pigs, explaining to his therapist that he, himself, had a pet guinea pig.

Again, merely seeing animals got Sam’s therapy on track by getting him talking.

Sam’s next session started with a visit to the horse stables. He befriended a horse named Rosie. Sam spent the session getting to know Rosie and was thrilled when he learned that she would hearken to his commands. He felt shocked that Rosie would respond to him by doing what he prompted her to do.

After that, Sam began to share with his therapist the negative things that were happening to him at school. “With Rosie’s help, Sam’s self-confidence gradually returned. He talked to his parents and teacher, and together they found ways to address the bullying at school.”

In these 2 case studies, Animal-Assisted Therapy was helpful in resolving emotional problems.

In both of these cases, the Animal-Assisted Therapy began in a small, “hands-off” form. Both of these 8 year olds began talking to their therapist as a result of seeing animals. Handling animals yielded even more glowing results.

Is your child emotionally disturbed? Are you a foster parent of an abused child? Have you adopted a child who has come from a negative background?

If so, consider integrating Animal-Assisted Therapy into your child’s regular therapy routine. AAT can be so simple, yet so effective at healing children’s emotional woundings.

Who is Eligible for Disability Tax Credits? September 30, 2014
Is It Bad To Be Labeled Disabled? July 17, 2014
Parents Speak Out About Raising Children with Disabilities December 23, 2014