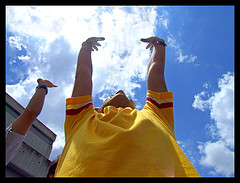 Do you think there is a greater number of children with disabilities in Canada today than there was, say, 100 years ago?

In Canada, of children aged 15 years and younger, 3.7 per cent have disabilities. The disabilities that affect this percentage of youths are varied. Beyond physical and mental impairments, learning disabilities plague many of Canada’s kids.

Disabilities in children aged 0 to 4 are often unidentifiable.

Did you know that disabilities in kids aged 4 and under can be quite difficult to diagnose? The reason for this is that children in this age group develop at different rates. Additionally, “Disability in young children can often be described only as a certain delay in development, whether physical, intellectual or other.”

Of the disabilities that can be measured in children of this age group, the most dominant is developmental delay.

In fact, of all children with disabilities, 65 per cent have “one or more” chronic health conditions (this equals about 118,000 youths). One of the most common of these conditions is asthma.

Learning disabilities encompass many problems related to learning in areas like speaking (dysphasia/aphasia), reasoning, math (dyscalculia), listening, reading (dyslexia), and writing (dysgraphia) are common types of learning disabilities.. These learning-related problems do not have to do with a child’s level of intelligence. On the contrary, children with learning disabilities are typically quite intelligent. So what’s the problem? Why can’t they seem to learn like other kids their age? Because their minds work differently that others’ minds.

Severe disabilities affect about 1.4 per cent of Canadian children.

While there are not as many children affected by disabilities as the older population, disability still has a bearing on the lives of young people. Those who are increasing awareness of children and disabilities are doing something to help Canada’s young disability community. Strive to learn more about the disabilities that affect children to become more aware and encourage awareness in others.