We Need To Learn About Autism 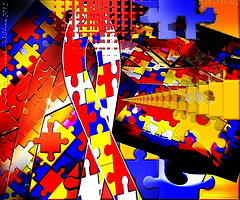 Autism is a new word to many of us. Even though medical researchers believe autism has been around since the early 1900s, it seems like the term has gained much of its popularity in the 21st century. Today, Autism Speaks Canada reports that one in 68 children has autism. This is compared to the one in 150 children diagnosed in 2002.

As autism increases in prevalence, communities struggle to embrace people with neurodevelopmental disorders.  The most profound example of this is Ontario’s slow expansion of social services. Right now, children, young adults and adults with developmental disorders, many of whom have autism, are on long waiting lists for disability services.

However, the struggle to incorporate people with autism into community life cannot totally be blamed on any person, organization or government office. We know very little about autism; it seems like a new phenomenon that has reached epidemic proportions in a short amount of time.

To create a society that accepts and values people with autism, we need to learn about it. In this brief overview, we hope to define autism in simple terms and discuss symptoms of the disorder so that we can better care for people with developmental disorders in our communities.

Have you heard the term autism spectrum disorder? Adding the “spectrum” to this term indicates that the disorder comes in many shapes and sizes. Just like no two individuals are exactly the same, no two autism diagnoses are the same either.

People are diagnosed as autistic when their behaviours, cognitive abilities and social skills seem to be affected by mental impairments.

Autism Speaks Canada mentions that autism is typically diagnosed in children who are about four years old, but diagnoses can occur as young as two. Therefore, the medical category that identifies autism spectrum disorder best is neurodevelopmental disorder.

Symptoms and Behaviours of Autism

Autism affects a person’s brain. This is why an individual with autism may work extra hard at developing acceptable social skills and daily habits. Behavioural challenges seem to be the most common trait among people who are diagnosed on the spectrum. In addition, some people with autism seem a little off when they are communicating, while others lack the ability to speak entirely. Unfortunately, people with autism often have very high IQs but are challenged in expressing themselves intelligently.

Symptoms of autism can be lessened with much training and attention. Currently, there is no cure for autism. Children who are diagnosed with the disorder will still have autism as adults.  If an adult with autism does not have a strong system of support around him or her, the symptoms can be mistaken for (and sometimes lead to) mental illness.

Because there is no cure for autism, and the number of diagnoses continues to rise, Canada needs to embrace people with autism. By learning about autism and recognizing symptoms of the disorder, it is possible to be more accepting of people who behave differently.

As we continue to grow our knowledge of autism, people will hopefully feel less shame about their disorders. We hope this leads them to feel empowered and confident in how they interact with society and exercise their intelligence.

What was once known as mysterious and sometimes unruly behaviour has since been identified. Autism is a neurodevelopmental disorder. In understanding this, we can help people with autism feel like they are positively unique… and wonderful.

The National Benefit Authority always strives to promote people with disabilities. If you dislike this article or find it to be inaccurate, please share why in the comment section of this post.

Ontarians with Developmental Disabilities Continue to Wait July 23, 2014
Art for All – Art Centres Throughout Canada August 01, 2014
Is Disability Preventable? August 04, 2014