Do All Veterans Get PTSD? Who Gets PTSD?

Common knowledge often suggests that all combat veterans get posttraumatic stress disorder (PTSD) and that they are the only ones who experience it. And while it is true, combat veterans do sometimes have PTSD, many don’t, and there are many other kinds of people who suffer from this stress disorder. In fact, it appears that anyone can be affected by PTSD if he or she are exposed to enough trauma. 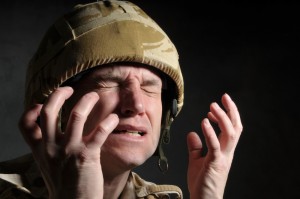 What is Posttraumatic Stress Disorder?

Posttraumatic stress disorder is a mental illness characterized by a pathological anxiety that typically occurs after experiencing or witnessing one or more severe traumas that constitute a threat to one’s life or the life of another.

The signs and symptoms of PTSD surround:

The lifetime rate of PTSD in veterans, overall, was found to be 8% in a recent study, while in the general United States population, the rate of PTSD is between 6.4-6.8%. Obviously, at only 1-in-12.5 veterans with PTSD, it is actually vastly more common not to experience PTSD as a current combat veteran.

That being said, some groups of veterans do have very high rates of PTSD. According to: Posttraumatic Stress Disorder in the US Veteran Population: Results From the National Health and Resilience in Veterans Study:

Additionally, veterans who have served more recently appear to have greater risk of PTSD.

Who Else Gets PTSD?

Anyone, including children and adolescents, can suffer from PTSD and PTSD can constitute a severe disability for some people. In one study, PTSD was present in 3.7% of adolescent boys and 6.3% of adolescent girls.

The more trauma a person experiences and the more severe the traumas, the more likely that person is to suffer from PTSD. Women are thought to be at a higher risk of PTSD than men as women tend to experience more traumas including those of being a crime victim. Sexual assault probably has the greatest impact on a woman’s risk of PTSD while trauma from combat likely has the most impact on men.

Posttraumatic stress disorder is a treatable condition and most people do recover from it. With treatment, the average duration of PTSD symptoms is 36 months whereas without treatment it is 64 months. The prognosis for those with PTSD is best for those who engage in treatment early, have strong social supports, avoid retraumatization, and for those who do not have other psychiatric disorders or abuse substances.

Treatments for PTSD include: