Is Cherubism a Disorder or a Birth Defect? 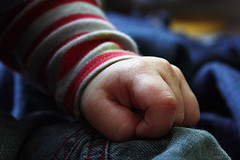 Cherubism begins early in a person’s life. The bone surrounding the jaw becomes enlarged, and is then replaced with cyst-like growths. Because of this, the face appears swollen in specific areas. As with all the disfiguring birth defects/conditions we have been blogging about this week, there are both mild and severe cases of Cherubism.

It’s interesting to note where Cherubism derived its name. Since Cherubism can cause swollen-looking cheeks, “the name of the condition is derived from ‘cherub’ (angelic looking, as depicted in Renaissance paintings).”

Cherubism varies in severity. A mild case of the condition is not always noticeable. On the other hand, a severe case of Cherubism can cause many problems/disabilities, such as:

Cherubism typically stops progressing some time during puberty. The good news is some children might grow out of this condition.

Cherubism should be treated in some cases.

Although children may have the potential to outgrow Cherubism, it should still be treated. Treatment will help ensure a child’s body systems are developing properly. Monitoring of the optic nerve, removal of tissue, and dental work are all treatments that might be given to someone who has Cherubism.

Share your thoughts about Cherubism or any other rare disorder/birth defect with Disability Living by commenting on this blog post. Thank you for your input!