How Are Invisible Disabilities Different? 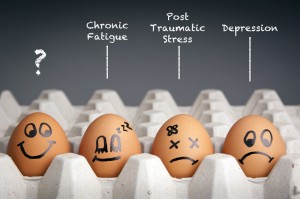 Many people with mental illnesses are impaired to the point of disability. For example, a person suffering from agoraphobia (a type of anxiety disorder that can range from mild to severe) may not be able to leave his or her house without having a full-scale panic attack requiring medical intervention. This can stop the person from obtaining gainful employment, having relationships, or even going grocery shopping. This person clearly has a disability and, yet, if you were to meet the person in his or her home, he or she might appear completely average and abled. It is estimated that the 12-month prevalence rate for agoraphobia is 1.7%.

Another example of an invisible illness is fibromyalgia. Fibromyalgia is a chronic, relapsing, pain condition of widespread pain and tenderness. People with fibromyalgia may have good days where they function just like anyone else and have other days where they can’t leave their bed due to pain. According to the American College of Rheumatology, fibromyalgia occurs in about 3-5% of females and in about 0.5-1.6% in men (although due to insensitive criteria, the actual numbers may be higher).

What Makes an Invisible Disability Different?

In most ways, disabilities are all alike whether they are visible or invisible. However, people with invisible disabilities often face additional stigma associated with their illnesses and are often accused of “faking” their illnesses or “gaming the system” if they need help with their disabilities. Because there is no visible sign of disability, these people may experience less compassion for their conditions. Even healthcare professionals may have a harder time believing in conditions that don’t show up in scans or blood tests.

How to Help People with Invisible Disabilities

What’s important to remember, though, is the old saying that “you can’t judge a book by its cover.” Just as most of us have no idea what it would be like to be severely hearing-impaired in daily life, most of us also don’t know what it would be like to suffer from a traumatic brain injury or other invisible disability. What’s important is that all people – regardless of their disability  – be treated with dignity and respect and receive the same quality of medical care as a person would for any other medical condition.