Autism diagnoses continue to rise. In many parts of North America, it is being considered an epidemic. With such a large amount of people being affected, more research is becoming available as to what may cause autism.

A recent finding by Michael Stern hypothesizes that there may be a link between autism spectrum disorder (ASD) and diabetes. 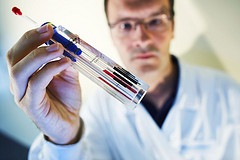 What have you heard about the causes related to autism? Do you observe common patterns within this disability? If so, are you also wondering if there is a connection between it and diabetes?

Is There A Link Between Autism And Diabetes?

Despite the wide range of testing being done to provide answers to those who struggle with autism spectrum disorder, there is no consensus among medical professionals that unites the platform quite yet. However, it is becoming apparent that individuals with ASD may be more prone to insulin disorders.

Do People With ASD Also Have Hyperinsulinemia?

Hyperinsulinemia is a medical term that represents insulin resistance. Biochemist Michael Stern believes that there is a link. In fact, he thought this relationship was common knowledge and put off researching his hypothesis for years.

After finally conducting and releasing his research, Stern revealed that there are “at least four genes associated with increased frequency in autism known to produce proteins that play key roles in a biochemical pathway.” In other words, his research aims to prove that at least four genes believed to cause autism are also known to play a role in the development of insulin related disorders.

Confirming The Relationship Between Autism And Diabetes

While all medical research is subject to some error, one fact about autism and diabetes is unmistakable: both disorders are on the rise. Even though this reality does nothing to prove the connection, it prompts doctors and biochemists to see value in conducting further research.

At this point in time, Michael Stern believes doctors should begin putting patients who struggle with autism on low-carbohydrate diets and monitor any changes or improvements that occur. Should he or other biochemists be able to show a viable correlation, then there are sure to be more tests and studies done to find out how ASD may be aided with diet, exercise, and insulin regulation. As for now, research must continue.