1 in 5 Canadians Live with Mental Illness 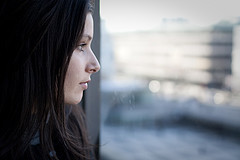 1 in 5 Canadians deal with a mental illness at some point in their lives.

While this is a widely distributed fact, the stigma and assumptions associated with mental illness often cloud the truth about mental health. Unfortunately, due to this stigma, many Canadians suffering from mental illness are reluctant to seek help for their disability.

If society was better informed about mental health, it is possible that this issue can be addressed and dealt with in a positive way that promotes healing and understanding.

Depression becomes an illness (rather than just a low period in life) when symptoms of feeling incredibly low last more than a few weeks, are classified as severe or are affecting different aspects of life. Depression is caused by distressing or upsetting life events, chemical imbalance in the brain or psychological factors.

Bipolar disorder is an illness in which the person has little control over emotions, whether depressed or manic. The periods of highs and lows are severe and can cause serious life disruption.

Seasonal Affective Disorder is a depression that is brought on by shifts in the weather. SAD is a mental illness when feelings of sadness become debilitating.

Anxiety disorders are mental illnesses that are defined by extreme and prolonged fear and distress with no apparent cause. Unlike anxiety, an emotion felt by everyone at some point, anxiety disorders can be debilitating.

Anxiety disorders can result in panic attacks which have physical side effects including chest pain, heart palpitations and dizziness, accompanied by feelings of fear.

Phobias are irrational fears that are paralyzing and terrifying. Obsessive-Compulsive Disorder  is an anxiety disorder commonly portrayed in media but rarely understood. People who suffer from OCD struggle with unwanted obsessive thoughts or rituals that are incredibly difficult to ignore or disregard.

Eating disorders are, unfortunately, increasingly prevalent in Canada. An estimated 70 per cent of women are dieting at any given moment.

Anorexia nervosa is a disorder related to severe weight loss and unhealthy perception of self.

Bulimia nervosa is an eating disorder characterized by weight fluctuations cause by frequent binging and purging.

Schizophrenia is a mental illness that strikes young people in adolescence or early adulthood. The symptoms include delusions and hallucinations often related feelings of paranoia. The mental illness varies in severity and ability to function normally in society.

Mental illness affects many Candians yet the strong stigma still exists. Understanding mental illness in the same way we understand all illness can lead to more Canadians receiving the treatment they need.