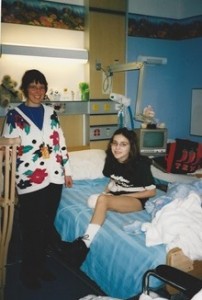 Normal, a word that holds a heavy meaning to the human race. It’s something we strive to be, something we want our families to be, something we feel we need to be accepted by our peers. But what is normal? I’ve come to believe that normal is different for every person, and while I can’t comment of what normal is for you, I can tell you that normal for me has always been different and it’s constantly changing. I was born with Klippel-Trenaunay-Weber Syndrome, now known as Klippel-Trenaunay Syndrome or KTS, a rare congenital vascular disorder that has been known to affect different parts of the body, in my case my right leg and foot. My right lower limb was significantly larger than its left counterpart and because of this I had to wear custom made shoes and various compression garments to control the swelling.

Essentially, lymph would circulate into my leg properly but it couldn’t circulate out and to compensate my leg and foot became very swollen. I developed blisters along the bottom of my foot that would bleed and provide an escape for the excess lymph. I was plagued with infections throughout the early years of my life and while some would land me in the hospital, others wouldn’t. Antibiotics were a part of everyday life.  I was bullied and teased for my odd appearance, but I didn’t think of it as bullying at the time because to me that was normal. I knew my leg was different but it was all I knew and I had nothing different to compare it to. I had always had a highly competitive spirit but I was limited physically because of my leg. My family tried to get me involved in as many things as possible but most sports weren’t an option for me. 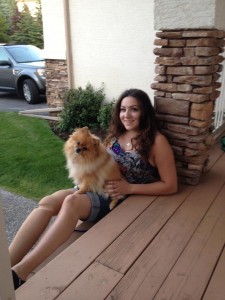 It was in August of 2002 that my life took a drastic turn. I was in a horseback riding camp when I started to feel sick but it didn’t feel any different than any of the other illnesses I’d had previously. We went to the hospital and I was started on out-patient IV, as was sometimes the case with my infections. Later the same day I started acting weirdly, I would say weird things or look around like I didn’t know where I was. My mom brought me to hospital right away knowing something more was going on. One of the nurses on staff recognized the severity of the situation and told my mom that I needed a PICU (Pediatric Intensive Care Unit) right away. The Pediatric ICU team was dispatched from the Stollery Children’s Hospital to get me and I was transferred by ambulance to their PICU where I was quarantined until Doctors could figure out what was happening. They determined that I was going in to Septic Shock and that my situation was very grave.  There was a very good chance that I would not survive and I was put into a drug induced coma while they tried to stabilize me. I was diagnosed with a strep infection that was Necrotizing, causing some of the tissue to die in my right leg and my parents were told that I would either begin to respond to the treatment in 48 hours or succumb to the infection. 48 hours in there was little change so a steroid was given and I gradually began to respond.

I spent 9 days in the PICU. After being moved up to a Stollery Ward I spent another 6 weeks undergoing various debridements and a skin graft in an attempt to save my leg. Over the next 6 months I couldn’t remain off of IV antibiotics for more than a few days before an infection would return. It was in March 2003 when the decision was made to amputate my leg above the knee. I made my peace with the idea of amputation quite quickly. I was tired of being sick, tired of missing school, tired of being away from home, my cats, and my friends. I knew amputation would open up a lot of new doors for me, that there would be so many new things I could do that I just wasn’t able to before and that was exciting for me. After I began walking the blisters returned and while I was able to be more physical than I had been previously my residual limb was still very sensitive and I would still get infections if I wasn’t careful. We tried scar revisions and different treatments but they always came back. It was hard and I was discouraged, my quality of life had definitely improved but I still couldn’t participate in a lot of sports, sometimes something as simple as tripping over my own feet would cause an infection and I would be back in the hospital.

In January of 2014 I got sick again and an MRI determined that I had a bone infection and a second amputation would have to be performed to take off about 2 more centimeters of bone. That doesn’t sound like a lot but for an amputee it is. The recovery time would be long and I would have to be refitted for new prosthetics and learn to walk again. Since this surgery I have been happier and healthier and the blisters haven’t returned. It is my belief that part of the infection was never really gone after the first amputation, it lingered and was dormant from time to time, but it was always there. 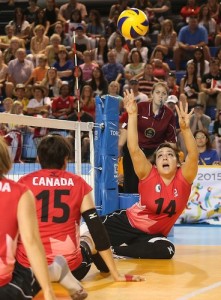 A few months later I received a message from Jolan Wong, a fellow amputee that I had met through a Kayaking and Sit Skiing event for amputees asking me if I wanted to come try Sitting Volleyball with Team Canada at a training camp they were having in Edmonton. I had always liked volleyball but I didn’t have any experience outside of high school gym class so I was nervous and curious as to how I would match up. I fell in love with the sport instantly and was elated when the coaches asked me if I wanted to come back to the next training camp. I felt like I had finally found something I could do, something I could call my own, something I could move forward in, I just had to check with my Doctors to see if this was something I was healthy enough to pursue, that my leg could handle, after all these girls were training for the Para Pan Am games with the goal of making it to the Paralympics. I was given the go ahead by my Doctors and I haven’t looked back since. Volleyball has become a huge part of my life, a passion, a challenge and it has opened up so many doors for me. I have traveled and met so many amazing people from all over the world. I have learned about a whole other world of para sports and the amazing athletes that I never knew existed, that so much of the world has yet to see. Volleyball has allowed me to push myself to new heights, to push through mental and physical barriers that I sometimes place on myself both on and off the court.

The schedule is busy and I am so thankful that my employer at AGAT Laboratories has been supportive of me and allowed me to take the time I need to compete with the team. My family has stuck with me through all the hard times and they continue to support me in all that I do. My teammates have become my second family, it is refreshing to be with a group of people that understand you in ways most people can’t, that you can show your entire being without being judged and I love that we have been given the opportunity to show people that disability doesn’t define who you are. My coaches know what I expect from myself and they push me to get there, they help me to be better. For a girl that was so limited in athletics for the first quarter of my life being able to represent Canada on home soil in Toronto for the Para Pan Am Games has definitely been one of the most humbling and gratifying experiences. We rallied hard, got the Bronze, and earned a berth in the 2016 Paralympics in Rio. I learned a lot about myself as a person and athlete during the Games and I saw a future for myself that I had never previously imagined. Words cannot express the extreme honor it is to wear the maple leaf and to represent Canada and I hope to be able to do so for years to come.

I’ve come a long way in the year and a half I’ve been playing but I also know I have a long way to go. I’m learning new things every day, new ways to push and challenge myself. You can achieve so much with hard work and dedication and it’s such an amazing thing when you can see and feel the changes within yourself. There are “limbless possibilities” out there, you just have to believe in yourself and be willing to push yourself to find them. Normal is unique to each and every one of us and while it is important to push forward, it is also important to look back and see how far you’ve come. I leave you with a quote from Roger Crawford that resonates with me, that I think about when I’m feeling down or when I need to be re-inspired.  – “Being challenged in life is inevitable, being defeated is optional.”