Overcoming the Challenge of ADD in the Classroom 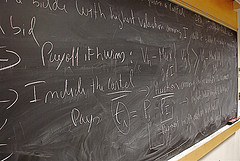 “He refuses to stay focused”, they say.  “He doesn’t see the value of education”, they try to explain.  But that’s not what I see as I try to tutor this fourteen-year-old boy, who struggles to stay focused but is obviously interested in learning.  It’s clear that his inability to stay on task is not a form of rebellion, nor intentional in any way.  He seems genuinely interested in the material, and is fully capable of answering every question in his math notebook correctly, yet the blank spaces where the answers should be never seem to be filled in, which is why I am here as his tutor.

This young boy had been removed from his class after complaints from other students and concerned parents about his constant disturbances in class, which distracted the other students and tainted their learning environment.  For this reason, he had to be separated from his fellow classmates into a more suitable learning setting.

When I met him, he was nothing like I expected.  He was interested in learning, maybe even excited!  I was excited to tutor him, because he always wanted to know more, and understood quickly.  The issues arose when I left him alone for a while to complete work.  I would return to see the same blank page.

The boy had been labeled with a term I hadn’t heard much about before, ADD or Attention Deficit Disorder.  The primary characteristics of this disorder include inattentiveness, hyperactivity, and impulsivity, so it’s clear to see how it could be detrimental to his learning career.

So how do we deal with children who suffer from a short attention span as a result of ADD?  I found the first step was to get to know the student– their interests, hobbies, talents, that way it’s easier to develop a learning plan geared directly toward them.  I did some research and learned that children with ADD are often able to concentrate on activities they enjoy. No matter how hard they try, however, they have trouble maintaining focus when the task at hand is boring or repetitive.

After working with him for a while, I learned that he was a visual learner, and colour coding helped him stay focused on the task at hand.  Multiplication, division, addition, and subtraction would all be labeled with different colours, making it much easier for him to focus.  Frequent study breaks also greatly benefited him.  Once we geared the study plan toward him, this student was excited to learn, and wasn’t bored.

I ended up learning much more from my student than he learned from me.  Suffering from ADD may get in the way of learning, but from tutoring this child, I realized that it doesn’t mean they can’t succeed at school.  Once parents and teachers take time to learn the child’s strengths and design creative strategies to help these individuals stay on task, learning will be much less of a chore.